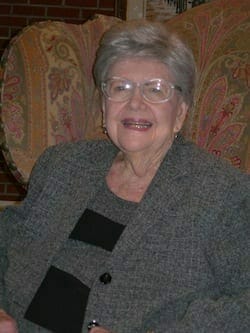 There’s No Age Limit on Staying Active and Loving Life

“I like the companionship. You always feel like you have friends here,” says Mary Shern, who moved to St. George Village in 2006. “It reminds me a little bit of living in the dorm in college — you can borrow whatever you need!”

That youthful college spirit is still quite evident in Mary’s vivacious, enthusiastic personality. The nonagenarian makes use of SGV’s indoor pool as often as possible, serves on the community’s food committee, has produced a couple of the Villagers shows and participates in the Great Decisions program…and also has just completed a soon-to-be-published book on the subject of being 90!

Mary’s life is a testament to the term “active aging.” Growing up in New York, she began working when she was just a teen.

“I started out in show biz, acting on radio soap operas. My first role was on the show, ‘Pepper Young’s Family’ — Burgess Meredith was Pepper! Later, I had a role on ‘When a Girl Marries,’” she says. “Then, I did an interview show for a while and years later, when I was living in Hawaii, I had a real estate show on Sunday afternoons called ‘The House Detective.’”

It was in New York as a young woman that Mary met and married her husband, a real estate developer…and that led to her second career as a realtor and a side job as an author.
“I was a real estate broker with my own company, teaching the business to agents who needed their licenses. I had my own style of teaching, so I wrote my own textbooks,” she explains. “I published three of those.”

She also wrote a novel that she says was “just happenstance. The Women’s Real Estate Association wanted me to write about how a housewife could get into the real estate business once her children were in school.”

Mary lived in Hawaii for 18 years before moving to Atlanta, where two of her children live, and where she continued working in real estate.

“At that time, the market in Atlanta was still pretty good,” she says. “I ran a real estate school and did a lot of speaking engagements and traveling.”

Finally, at the age of 90, Mary decided to retire. But that didn’t mean she retired to an easy chair. She wrote an autobiography just for her family, and then moved on to write the new book in progress.

“The books weren’t a big part of my career; they were more like an ancillary occupation at the time. But writing did become a kind of compulsion for me,” she laughs. “I don’t know how much longer I’ll do it, though.”