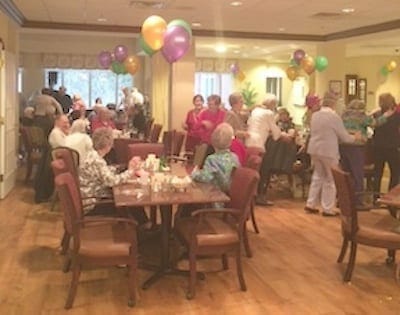 It was “let the good times roll” at St. George Village on Fat Tuesday, when residents and staff gathered for a Mardi Gras celebration.

The group, decked out in festive beads and masks, did a Mardi Gras march to the tune of “When the Saints Come Marching In.” They were led by resident Grace Samson, who will turn 100 in July! Entertainment was provided by The Class Act Band, and everyone feasted on shrimp and a variety of Mardi Gras hors d’oeuvres.

The roots of Mardi Gras can be traced to medieval Europe, passing through Rome and Venice in the 17th and 18th centuries to the French House of the Bourbons. From here, the traditional revelry of “Boeuf Gras,” or fatted calf, followed France to her colonies. Over the centuries it evolved into a celebration held in several countries — most famously in New Orleans, La. in the United States — on Shrove Tuesday, the day before Ash Wednesday, and signals the beginning of Lent. The traditional Mardis Gras colors have great significance — purple for justice, green for faith and gold for power.