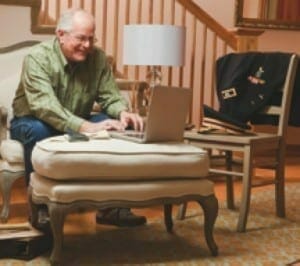 Exploring Your Family’s History Can Be Fun, Rewarding

If you’re like most senior Americans, you like to feel connected: to the past, to a place and to others. No matter your age, discovering your family history can be a rewarding way to establish those connections and help uncover who you are and where you came from.

It can start simply by identifying who is in your extended family. You may be able to find the names of your ancestors—grandmothers, uncles, cousins—going back hundreds of years. Next, you can get to know them, learn where they were born, whom they married, how they made a living, where they lived and how they died.

The ability to make such connections is getting an unprecedented boost this year with the release of the 1940 U.S. Census. Research shows that 87 percent of Americans alive today should be able to find a relative in the 1940 Census. That’s almost 275 million people who have a connection to these records.

This is the census of The Greatest Generation. It showed 16 million American men and women safe at home on the brink of joining the deadliest war in human history. For the more than 400,000 who never returned from World War II, it’s the last census to record their names. The census tells the story of a country grappling with the greatest economic hardship it had ever known, something many find particularly relevant today, as the country starts to emerge from its current economic troubles.

Because modern technology lets you access the census at home as never before, Tim Sullivan, the president and CEO of Ancestry.com, the world’s largest online family history resource, says his company has made the 1940 Census free to search at www.ancestry.com/1940. Millions of people can literally sit down with neighbors, friends or relatives who were actually there in 1940, find the census page with their name on it, and get them talking.

You’ll find an address for their home, names of family and neighbors. You’ll see the highest grade they had completed in school and the family’s yearly income in 1939. While they talk, you may get to know them better and get a better understanding of that place in time. You may even get to know a little more about yourself and how you fit into the larger arc of your family’s history and the world’s.

It could help you understand—and share with your family—the essential human question of who you are and where you came from.