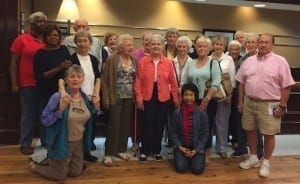 At St. George Village, we enjoy exploring places, near and far. Recently, some of our members put on their traveling shoes and headed for Savannah, Ga., one of the the beautiful and historic cities in America. There, they visited many popular attractions of this coastal city, including Forsyth Park.

Forsyth Park, which covers 30 acres of land, was named for John Forsyth, the 33rd Governor of Georgia and one of the land donors. Perhaps the most well-known feature of the park is the large fountain that sits at its north end. Built in 1858, the fountain resembles a few other fountains found around the world, including some in Paris and Peru. Every year on St. Patrick’s Day, the City of Savannah dyes the water in the fountain green during a ceremony that is part of the annual Parade festivities.

You can read much more about Forsyth Park and Savannah at Visit Historic Savannah.